One of my favorite monsters from Cyclopedia-era D&D Creature Catalog is the Gray Philosopher. I never got a chance to use it back in the day, but I had an opportunity to include one in my recent 5th Edition game. It was pretty fun to adapt to the new edition. 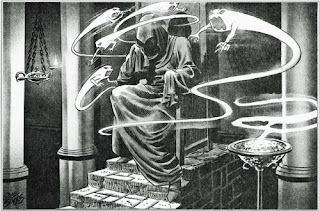 A gray philosopher is the undead spirit of an evil cleric who died with some important philosophical deliberation yet unresolved in his or her mind. In its undead state, this creature does nothing but ponder these weighty matters.

The gray philosopher appears as a seated, smoke-colored, insubstantial figure swathed in robes. It always seems deep in thought. Flying through the air surrounding the philosopher are a number of tiny, luminous, wispy creatures known as malices. They have vaguely human faces, gaping maws, and spindly, clawed hands. These vindictive creatures are actually the philosopher’s evil thoughts, which have taken on substance and a will of their own.

The gray philosopher cannot be turned by a cleric but has no attack of its own; it will not defend itself. Unlike the philosopher, malices constantly search for victims on which to vent their petty but eternal spite. Malices do not stray more than 120 feet from their philosopher but may pass through the narrowest of openings in their ceaseless flight. A malice normally attacks until destroyed or turned. However, all these creatures vanish instantly if their philosopher is destroyed.

Ethereal Sight: The Gray Philosopher can see 120 ft. into the Ethereal Plane when it is on The Material Plane, and vice versa.

Death Epiphany: When the Gray Philosopher falls to 0hp, it looks up with an expression of malicious enlightenment on its face, then vanishes with a lingering shriek of evil delight. All creatures within 60’ who hear this horrifying sound must make a DC: 15 Wisdom save or take 6d8 psychic damage and become frightened until they finish a long rest. On a successful saving throw a creature only takes half damage and is not frightened.

Magic Resistance: The Gray Philosopher has advantage on saving throws against Spells and other magical effects.

Turn Immunity: The Gray Philosopher is immune to the Turn Undead ability.

Incorporeal Movement: The wraith can move through other creatures and Objects as if they were difficult terrain. It takes 5 (1d10) force damage if it ends its turn inside an object.

Turn Resistance: The lich has advantage on saving throws against any effect that turns Undead.