On Saturday June 16, I ran the Dungeon Crawl Classics adventure “Sisters of the Moon Furnace” for Free RPG Day. This was my second DCC Road Crew game. My first was back in February, at BASHcon where I had a large group of eight players. I had the opposite circumstance this time, with only two players at my table, but I ran anyway.

The event took place at The Dragon’s Roost in Sylvania, OH (part of the greater Toledo area). The Dragon’s Roost is a coffee house/game store that’s been open for just over a year. I think this was probably their first Free RPG Day. They also make the best iced chai latte I ever had. The ‘Roost seemed to have pretty good business that day; it was as busy as I ever saw it. Besides me, there was someone running Starfinder and the old West End Ghostbusters game. There were also a couple of guys demoing a card game they just published called Master Thief that is all about stealing works of art it sounded pretty fun.

Like I said, I only had two players, which was kind of disappointing, but the Toledo RPG scene is kind of hard to parse, and I can never guess what kind of turn out I’m going to get. But two players or not, I’d be damned if I wasn’t going to run, after all the work I put in to prepping the game.

My players were Gordon Cooper, who I had spoken with a couple of time before through G+, and my newly-adult son Erik. Gordon runs DCC so he’s familiar with the game, but this was his first time playing. Erik had never played DCC, though he’s heard me talk about it a lot. Two players, no problem. I gave them each eight 0-level characters and we were off.

Two players and 16 characters wasn’t the tactical nightmare I was afraid it might be.  In fact in some ways it was easier. With only two players, I didn’t have the problem I often run into in convention games where several different people (usually strangers) low-level argue about what course of action to take or where to explore next. With only two players, the decision making was pretty harmonious. Individual combat turns were kind of long, but after the zeroes started to get winnowed down, the pace picked up pretty quickly. 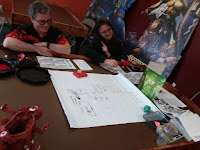 I’m not going to go over the module in detail, but I do want to hit some of the highlights of the session. Spoliers for “Sisters of the Moon Furnace,” obviously.

The moon-boulder of on top of the well in the first area squashed several PCs, much to my delight.

The PCs never bothered with the jeweled tiles in the first area, so a lot of the magical statue effects never manifested. 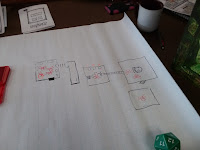 Gordon’s clearly an old-school gamer, as he made judicious and careful use of the ten-foot pole on every staircase and doorway.

The tank of floating heads in the library was a lot more dangerous than I expected—probably the most dangerous monster in the session. Between possession and its telepathic scream it killed something like five characters. 1d3 damage will make many 0-level character’s heads explode like Scanners. 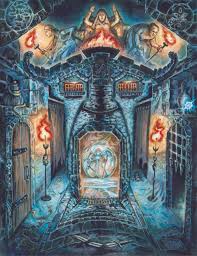 After one of Gordon’s characters got the flesh stripped off their skull from the blood blights, Erik’s gongfarmer covered his PCs’ heads with night soil, making them unappetizing to the monsters. I think this was the first time I’ve ever seen manure used to such tactical advantage in a game, and I was right proud of the lad.

Gordon pointed out that the final encounter in the furnace room with the Warden is illustrated on the front of the Judges Screen, something that I totally managed to notice for a year.

Reading through the last encounter, I didn’t see anything that said the players couldn’t just run past the Warden and the Paroxysms and jump through the furnace door to safety. I decided there was a hot iron grate in front of the door, but a good STR check with a crowbar made short work of that. I certainly wasn’t going to cheat the PCs of their forward thinking just for the sake of a fight. The warden managed to kill a few PCs in the rush, but at the end of it, several PCs stood safe in the Fields that We Know.

From 16 starting zeroes, plus four more replacement characters near the end, I think 5 in total managed to make it out alive.

During a break I did talk to the fellow running the Master Thief demos. He was interested in what we were playing, and I talked with him about DCC for several minutes. I think if he wasn’t running his own games I could have gotten him to play.

Despite the small player base, we had a great time, and I was glad to do it. Both players really enjoyed the adventure. I’m certainly going to try and run some more Road Crew at this venue.