Putting the "Party" in Adventuring Party (How to Mix and Mingle)

Your player characters have to attend a party or other large social function full of many (dozens? hundreds?) of NPCs. They are there to learn things, meet contacts, influence people, or otherwise do something related to their current goals or missions.

I have found this scenario to be one of the most difficult roleplaying situations to run. It used to come up a lot back in my old World of Darkness games, and it still pops up in D&D and other games I currently play. Most recently it occurred in my Silent Legions modern-Lovecraftian-horror campaign. In that particular situation, the PCs had to find and steal a tablet computer from a NPC. They also wanted to learn more about the evil cult that may or may not have had some influence over some of the high-society party-goers.

In the past, I would describe the party location, then basically go through a list of all the most interesting or well-known people the PCs see. The players would keep a list of who they saw, and decide who they wanted to go talk to. This technique worked but was unsatisfying. It feels like the party only has half a dozen attendees. It's like a video game where you walk into a room and one-by-one talk to each NPC with a question mark over their head.

So I did things a little differently this time. I treated the party like a small dungeon, and I treated the guests like wandering monsters. I also took some advice from Vincent Baker’s Dogs in the Vineyard and Apocalypse World games. I made the NPC proactive. I made them come to the PCs with their problems, rather than make the PCs fish them out.

Here’s a run-down of how it worked for the Silent Legions game. I’m sure it would be easy to adapt to other settings.
The Situation
The PCs are invited to a big fancy party at the Seattle Space Needle. They need to find out who has the tablet computer and steal it from them. The party is hosted by the North Pacific Association of Creative Technology (N-PACT) and LaSalle Technologies. Trendy conceptual artist Veronica Vespers is going to unveil her newest project at the party. The PCs suspect N-Pact and LaSalle have connections to the cult they are currently investigating (Rite of the Grey Truth). Any info the PCs can get about that will also be useful to their goals.

Setting Things Up
The conference floor of the Space Needle has three large rooms, which I treat as dungeon rooms. The whole place holds about 300 people. As the PCs split up, mx and mingle, and enter each room, I describe the décor and atmosphere as well as the NPC that draws the most attention. 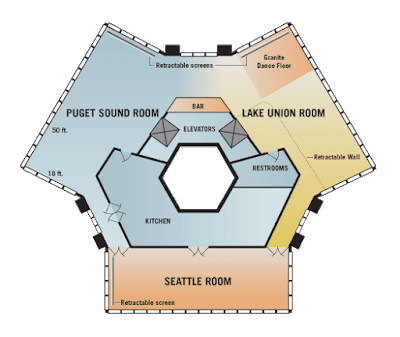 Mix and Mingle
As the PCs split up and move from room to room, I roll on the “Mix and Mingle” NPC table I made. This is a party, so people are here to chat and have fun. These are the NPCs who will approach the PCs and share their business with them. For this party I made a list of 8 NPCs. Some of them are directly involved with the PCs current mission. Several are just interesting folk that may act as useful contacts later on. A few are red herrings. Most should have some connection to one or more of the campaign's factions. All of them should be fun for me the GM to play and offer some interesting role-playing opportunities for the players.

The chart lists the NPC, some key words, a brief description, as well as what they want and how they will act towards the PCs. (Note: The Ascension Society is a popular spiritual/self-help group, kind of like Scientology-Lite. It's financially shady, but ultimately benign with no real occult connections. )


I keep rolling for mix and mingle encounters until it’s no longer interesting or the PCs’ or NPCs’ actions move us into a different phase of the “plot.”

For this particular adventure, I also had a random chart for where the tablet computer was. This meant the PCs were forced to interact with the PCs to find out where the MacGuffin was.

In play, this all worked extraordinarily well. NPCs like Thomas J. Bundy and Justin Zhao were very fun to play. Constantly being pestered by friendly NPCs added an extra layer of challenge for the PCs as they tried to be all sneaky and subtle while looking for the tablet. The interactions also added a touch of emotional weight when the eventual monster attack killed several of the PCs new friends.

I’m eager to throw another party in my next campaign.