It has been a busy time here down in the Flumphwerks, what with my son graduating high school, the release of Crepuscular #1, and working on a comic with Leighton “Cowboy” Connor.  That’s to say nothing of various other art assignments, trying to follow up the ‘zine, and trying to prepare for Gencon in (*checks calendar, shudders*) sweet Christ, only eight weeks.

So the long and short of it I’ve fallen behind on the blog, specifically my Silent Legions session reports. We’ve only played two sessions since the last report (I told you it’s been busy), and this recap is going to be woefully inadequate, but I want to try and hit the high points and go over the most interesting things happening.

Broadly, the players are really enjoying the game. They’ve enjoyed the death and madness, leaning into it like the roller coaster ride it should be. My son, especially, has been enjoying it, which is good because he’s the one that suggested a Lovecraftian horror game in the first place. The Factions/Cult part of the game has really helped keep interesting things going on in the sandbox, and I’ve yet to be at a loss for interesting things to throw at the PCs. The heroes are also finally starting to get a good handle on the main factions in and around Seattle, and they’re starting to make alliances and pick sides.

So here’s the interesting things that have happened…

Vinnie is approached by the Garibaldi Syndicate, the new crime family taking over Seattle. Word of the PCs expertise in the occult has reached Zeno Garibaldi (head of the syndicate) and he wants the PCs to do a favor for him. As a show of good faith, Mr. Garibaldi has “taken care of” Vinnie’s problems in Atlanta.

N-PACT (North Pacific Association for Creative Technology) is hosting a party at the Space Needle. At this party, Veronica Vespers (a trendy modern artist) is to reveal the plans for her new large-scale installation sculpture project. Vespers will have a tablet computer with her, Garibaldi wants that tablet (or at least the data on it).

Vinnie eagerly agrees to the request, and the rest of the players are all too happy to make friends with the Mob.

Meanwhile, Bunny, Abby, and Glen make their way to Yakima, following the cannibal gunmen from the last session. In Yakima they players totally fail to interact with any of the interesting PCs. Thus is the way of player-driven sandboxes.

But here’s what they find out about Yakima anyway…


The investigators decided none of this was currently their problem and decided to make their way back to Seattle. (They do plan on coming back at some point, hopefully with help from their new Mafia buddies.)

So by not investigating, the cannibal cult (Blood Message of the Shadowed Fellowship) was able to continue with their plans unimpeded. The world doesn’t pause for the PCs! That night, after the “barbecue” the cult opened the vault in the floor of the pole barn and called upon their ghoul allies (“the old fellers”). The ghouls performed an augury on the guts of a sacrifice and determined that the Rheinholdt Manuscript (stolen by Chase the rival cultist way back when) is in a Pawnshop in Seattle. The cult sends a retrieval team to PC’s neighborhood!

A few days pass in Seattle, and the PCs spend time getting ready for the party at the Space Needle (it’s super fancy). We are also joined by a new player and his PC, semi-retired police officer Abraham Goldstein.

The cannibal cultists enter Vinnies’ Pawnshop, dressed in their Sunday best. Bunny recognizes one of the gunmen from the fracas at the apartment complex. They inquire about rare books, especially those dealing with “esoteric” subjects. They don’t seem to believe Vinnie when he tells them he has nothing like what they’re looking for, but they leave anyway.

The PCs hide the Rheinholdt Manuscript in Glen’s apartment. Glen’s player isn’t here this week, and my players know I won’t kill and absent player’s character off-screen. I can’t argue with this lite meta-gaming, and it moves the story along anyway. 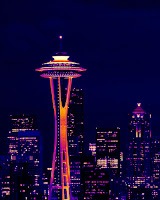 The PCs arrive at the Space Needle and it’s a big fancy party with a lot of rich and beautiful people. On their way in, they run into a woman named Danielle Blake. She is Pakistani-British, very agitated, and if not yet insane, then close to it. They find out she is another occult investigator, on the trail of The Rite of Gray Truth and has made connections with them and Lasalle Industries.
Lasalle Industries is a major corporation in Seattle. Marcus Lasalle is a member of N-Pact and Veronica Vesper’s patron. The PCs and Danielle decide to work together.

At the party, the PCs meet and talk to a variety of interesting character. I will make a separate post later about the mix-and-mingle charts I came up with. (Edit: It's right HERE.)

The most fun NPC to play was Thomas J. Bundy of Thomas J. Bundy Motors!, the owner of the biggest car dealership in Seattle (“Why don’t you come down to the dealership on Monday! We’ll set you up with something nice and big!”) . Turns out he’s the guy that sold Augustus Blott his Humvee. The PCs make note to visit Bundy later.

Veronica Vesper’s tablet kept moving around. I had a random table for “Where is the Tablet now?” At one point it was in the briefcase of Luke Patton, Lasalle’s intimidating personal bodyguard.

Vinny overhears Lasalle and Patton talking about some kind of shoot-out between the Garibaldi Syndicate and Lasalle’s “Thaumic Assets Division.” It’s all very sinister.

Eventually Vesper gives her presentation and the tablet is in her possession. Abraham fakes a heart attack, and Bunny lifts the tablet in the confusion.

The presentation reveals Vesper’s new art project. It’s a series of five motion sculptures of various sizes. They resemble Mobius loops made of mirrored tiles with three spires weaving in and out of the loop. The whole thing causes a weird euphoria to look at (1 Madness).

(The PCs haven’t figured this out yet, but they will when they have a chance to examine the data. The sculptures are components of a large-scale summoning ritual that will free Dahg-Othyg-Zoag from his prison in the center of a super-massive black hole and bring the alien god to Earth.)

That’s when the power goes out!

The cannibal cult attacks the Space Needle! While the PCs were out, the cult broke into Vinny’s home, found his hairbrush and used his hair to track him here!

The cult strike team consists of four mundane gunmen, a petty sorceress, and the half-ghoul cursed warrior with a black katana. Chaos and panic ensues. Great winged beasts crash through the windows, looking for Vinny!

It’s cult-on-cult violence! Lasalle uses the Despicable Worm to create Some Hideous Thing of Raw Muscle and Ropey Tendons. His bodyguard Patton pulls on a mirrored mask, revealing him to be the lead gunman at the hotel shoot-out from two sessions ago.

Bunny, Abraham, and Abby let the rival cults clear the stairwells of each other. Bunny has the tablet, it’s time to get out of there.

Danielle Blake blasts one of the monsters with some weird alien cancer gun. She is then lost in the fracas. (She will pop up again, to be sure.)

Vinnie, poor brave Vinnie, he was in a separate room from his friends when the fighting started. The half-ghoul and the sorceress are gunning for him specifically because he knows where the Rheinholdt Manuscript is. He takes cover behind the bar and starts making and throwing Molotov cocktails (because it’s not a real game until the Molotov cocktails come out). The fire succeeds in driving the half-ghoul away and kills the sorceress. Sadly the fire gets out of control (Vinnie had previously spilled booze all over the bar so the whole thing would light up). Vinnie’s player makes a couple of bad rolls, and we lose our second to fatal flames.