Surprising no one, several PCs have died in my Lamentations of the Flame Princess campaign. Some of my players have difficulties coming up with concepts for their replacement characters. They don't want to be just a fighter or just a cleric. I dig that.

I put together this list of character concepts for the four basic classes (plus the Alice). I did it partially as an aid for my players, but mostly as an interesting thought experiment. What kind of characters can I make with the different classes without changing any mechanics?

You’re trained to kill people for the State. You probably go bare chested or wear some cool chain armor. Get yourself a cool black hood and a great big axe, Use gambits to do badass combat tricks with a noose.

Pirate
Yo-ho-ho! Grab yourself a cutlass, a fancy hat, and a parrot. Drink rum and swing on some chandeliers. If you don’t already have them, you’ll probably get a peg leg, hook, and/or eyepatch eventually. It’s LotFP after all!

Bravo
You’re a fancy lad who fights for fun, but you’re good at it! Get yourself a sword and a dagger and some fashionable clothes. Swagger around in seedy taverns looking for fights.

Burly Farm Lad
You’re a simple man, but clean country living has made you strong and beefy. You ain’t gonna’ let no monsters eat your kin. Grab yourself a pitchfork, some torches, and maybe your granpa’s old shield. 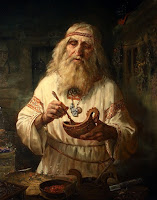 You’re a little bit of doctor and a little bit of white witch. You know the natural healing medicines of plants, stones, and the elements. Get yourself a white smock, a big hat, and a bagful of roots and herbs. Memorize a lot of healing spells.

Philosopher
You’ve dedicated yourself to the studying the universe and contemplating the nature of God. You’ve had some startling insights in the meaning of Creation, but no one’s really listening to you yet. Get yourself a big pile of books from Plato, Thomas Aquinas, and Descartes.  Memorize a lot of divination and augury spells.

Hermit
You live up in the hills, far away from the prying eyes of neighbors and nobles. Also, God speaks to you in dreams, the whispering wind, and the twinkling stars. Get yourself a burlap robe, a great big beard, and a basket of hallucinogenic fungi. Memorize a bunch of spells that let you survive in the wilderness.

Witch Hunter
You are authorized by the church to hunt down witches and demons and bring them to the torch. You’ve learned the blessed rites of exorcism and abjuration. Get yourself a pistol, a sword, and a great big hat. Memorize Turn Undead and a bunch of protection spells.

You’ve straight up made a deal with Satan and his devils. You’re also probably known as a scandalous libertine. Dress all in black velvet and talk like Vincent Price. Memorize a lot of summoning spells.

Freemason
You and your brothers have dedicated yourself to understanding the grand architecture of the universe. You have a decent support network of secret lodge members throughout Europe. Get yourself a sword, an apron and a collection of mathematical apparatuses. Memorize a variety of divination and buff spells.

Witch
You’ve dedicated your mind and body to something far older than the Devil—Hecate, the Morrigan, Shub-Niggurath, whoever. Get yourself a sacred athame and dance naked under the moon. Memorize a lot of charm and transformation spells.

Occultist
You study magic of all origins and traditions. For you, magic is a field of academic discipline more than a spiritual devotion. Get yourself a sensible skullcap and some tiny little eyeglasses and start building that library. Memorize a lot of general purpose utility spells.

Historian
The Empire is built on the ashes of history. You intend to know it all, no matter what kind of dangerous underground labyrinths you need to infiltrate. Get yourself a lantern, a notebook, and a satchel full of books. Put a bunch of points into Languages and Search.

Woodsman
Someone’s got to gather firewood and keep the wolves away from your village. That’s you! Get yourself a bow and a hand axe. Put a bunch of points in Bushcraft and Stealth.

Physician
Healing magic is rare and morally suspect. Needle, thread, and a jar of leeches are much more reliable. Get yourself a collection of scalpels and a creepy plague doctor mask. Put a bunch of points in Medicine (assuming your campaign uses that popular house rule) and Bushcraft (to find legit medical herbs).

Bounty Hunter
The Empire is full of criminals and deserters on the run. There’s good money to be made in bringing them to justice. That’s where you come in. Get yourself a club, a whip, some manacles, and a stack of wanted posters. Put a bunch of points in Search and Sneak Attack. 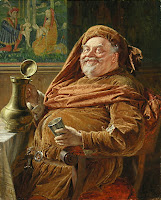 Drunkard
God loves fools and drunks, and you ented to test that theory to the limit. You're a rake and wastrel whose never done an honest days work in their life. But somehow Lady Luck keeps pulling your ass out of the fire, usually through a series of imporbable coincendences. Get yourself a big ole' beer stein and some sloppy clothes. Put points into Sleight of Hand and do whatever you can to scam drinks from friends and strangers.

Changeling
You were kidnapped by the Fae as a child, but you’ve somehow made your way back to Christendom. You brought a little bit of that faerie magic back with you, and it manifests in the oddest ways. Put some points into Bushcraft and make friends with the Elf.


Bard
The world is made of stories and songs. You’ve committed so many to memory that you can occasionally tap into the Great Narrative of the Universe rewrite your own story. Get yourself a guitar and a hat with a feather in it. Put some points into Languages and talk in rhyming couplets.

Lucid Dreamer
You’re asleep in the “real” world and now you’re trapped in this nightmarish world of war, monsters, and sorcery. At least that’s what you believe. Everyone else thinks you’re mad. You have few memories of the Waking World. Occasionally you can change the dream-stuff of this nightmare world in unpredicatable ways. Put points into Search and quote Lovecraft and Dunsany a bunch.