This was a relatively short session that mostly revolved around trying to cure Mortimer’s illness. He was only one failed saving throw away from death, and the players were getting pretty frantic. Julius’ player wasn’t with us this session, so we didn’t get to introduce his new character.


After returning from Pagan’s Well, the party wakes up the next morning in their rooms at the Happy Woodsman. Madeline, Mortimer—the three characters who has splashed around in the filthy black water at the bottom of the warchief’s well—were all required to make posion saves. Only Mortimer failed. The unfortunate librarian woke up oozing black tarry discharge from every pore and orifice, plastering his bedsheets (also, CON and CHA damage).

Belinda and Gerrit tried to convince Svetlana (the innkeeper’s least-horrible daughter, who is also obsessed with Belinda) to keep their friend’s illness a secret. But villagers are going to gossip, and soon the entire town new that one of the visiting adventurers was sick. Rumors of plague begin to spread. Kerney the innkeeper considers tossing the party out of the inn but is mollified when the party gives him a good pile of silver, more than enough to buy out all the rooms in the inn and pay for new linnens to boot.

The rest of the villagers are fairly easy to talk down, because, again, they are all very stupid.

Gerrit and Belinda spend the rest of the day hunting for herbs in the woods (the parts they didn’t burn down) trying to mix a remedy for Mortimer and manage to put together a poultice that will give him a bonus to his next saving throw. (He needs to succeed at two saves in order to throw off the illness.)
Mortimer makes his save, and his condition doesn’t progress, although it doesn’t get any better. The party’s feeling pretty confident, and the villagers are less nervous.

Unfortunately, the next morning Mortimer fails his save (even with the bonus) and gets worse again. Mortimer is down to 3 CON and 2 CHA at this point, and things are getting dire. The party questions everyone they can in the village, trying to get information about any kind of healer folks might know.
On my list of rumors, I have an entry that there’s a folk healer in the marshes near Keil whose touch can cure the sick, so I decide to feed that to the players. Keil is only 8 hours south of Kodstadt, so the party (including Mortimer) decide to head to Keil with all due speed. Ana, still upset about losing her arm, stays behind. The witch tells Belinda that she’s realized that the Transylvanian Hunger spell can restore her arm, but it would probably require her to kill someone. Belinda tells her to behave while they are gone.

The ride cross-country to Keil is uneventful. About an hour outside of Kiel, they run into a man with a mule cart and pet bobcat. The man introduces himself as Simeon, a practitioner of the thaumaturgical arts on his way to visit and professional associate of his. He was ready to stop for the night in Kiel, but witch hunters are there right now, getting ready to string up some root-worker and a few other non-desirables. He decided it was safer to skip town while the getting was good.

The party rolls double-sixes on their reaction roll and convince the wizard to come with them. They all hate witch hunters and ask Simeon to come help run them out of town and save the accused. Simeon happily agrees, eager to show those self-righteous witch-burners what’s what.

The party stashes their horses and Simeon's wagon in an abandoned barn and creep towards the village. Belinda and Simeon keep their distance, while Mortimer and Madeline stealth towards the town square, where there seems to be something important going on. Simeon casts invisibility on Gerrit, and he slips into the village square as well.

A large crowd of filthy, sick, and hungry-looking villagers gathers around a large cross erected in the center of the village square. A large gallows platform, obviously of fresh construction, is art one end of the square. Four people stand upon it with nooses around their necks: Brother Timothy (the folk healer), Frau Shulz (the midwife), Sandra (a teenage girl), and Fletcher (the poison maker). Before them all, walking on a long roll of cloth to keep the mud off her boots, is Isadole Spence, the witch hunter. She is a severe-looking woman with a long skirt, high boots, a big hat, and a whip and pistol on her hips. She’s accompanied by four well-armed goons. 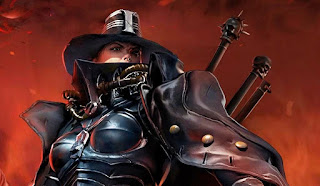 Isadole paces back and forth in front of the gallows, reading off the list of the condemned's crimes, quoting the gorier parts of scripture, and generally doing the whole witch-hunter thing. Madeline and Mortimer position themselves behind cover with their guns and crossbows, while Gerrit makes his way to the witch-hunter’s nearby wagon and finds her keg of gunpowder. Gerrit constructs a makeshift fuse and chucks the burning keg into the center of the crowd. It explodes, killing several villagers and causing the big cross to fall over, crushing a small child. The crowd panics!

Mortimer and Madeline open fire on the goons while the goons unload their muskets on Gerrit, thankfully missing. Simeon casts Summon and calls up a fungus demon. Sadly, he fails his control check, and the demon turns on him. (This spell will work properly at some point, I’m sure. As it is, Belinda has convinced herself to never use it.) Belinda cast Charm Person on Isadole the witch-hunter, who fails her save. Gerrit shoots dead on of the goons on the gallows.

With the guard dead, Madeline makes her way to the gallows platform and starts to free the condemned. Garrit engages one the goons, sword-vs-sword, while Mortimer’s crossbow bolt takes out another goon. Belinda makes her way through the panicked crowd calling for “help” until Isadole can see her. The charmed witch-hunter moves to her side. “Don’t worry, my dear, I won’t let any of these filthy peasants touch you!” Isadole says as she uses her whip to drive away the rabble.

Simeon's pet bobcat leaps into the fray to protect his master from the fungus demon. The large cat’s body ripple like water, and suddenly it becomes wolf-sized brain demon! Simeon's bobcat was a bound and shapeshifted demon this entire time! It’s a tense demon-on-demon fight, but Simeon and his familiar come out on top.

Garrit finished off the last goon while Madeline frees Brother Timothy the healer. The charmed Isadole is so distracted that she doesn’t notice Belinda placing her crossbow under the witch-hunter’s chin and pulling the trigger. The bolt shoots clean through her head, pinning her cool hat to a tree limb above.

The witch-hunters are defeated, and the villagers have scattered. The party leads the folk-healer out of town while Garrit loots the hunters’ wagon.

The grateful healer, a portly old man with a white smock and broad straw hat, introduces himself as Brother Timothy. He lives in a small cottage in the swamp, and his family has been providing medicines and physick services to Keil for generations. But sickness and famine hit the village recently, and as soon as the witch-hunters came to town, the villagers betrayed him, along with the midwife, some poor innocent girl, and the local poisoner. “Well, they might have been right about him. Still, how’s that for gratitude?”

Brother Timothy is more than happy to heal poor sick Mortimer. He rubs some moss on his chest and plants a few leeches on his face while chanting the Lord’s Prayer, and just like magic, Mortimer’s illness is cured! They ask Brother Timothy is he’d like to return with them to Kotstadt. Since the villagers betrayed him and Isadole and her goons burnt down his house, the folk healer thinks that finding a new home isn’t such a bad idea. The party says their goodbyes to Simeon and his familiar, and make their way back to Kotstadt with Brother Timothy and a chest-load of loot from the witch-hunters’ wagon.

When they get back to Kotsadt, Ana has a fresh new arm hidden under her cloak, and Gorst the huntsman hasn't been seen for a while.