We're about two sessions into our Fate Accelerated superheroes game (Legacy City Heroes) over on the Monkeys Took My Jetpack podcast. So far it's going very well. One of the main themes of the campaign is the concept of "legacy." Superheroes have been around for many generations. Someone may have inspired your in the past. Your hero will inspire someone in the future.

For tone, I'm playing it straight. I want Neo-Silver Age superhero adventure, similar to what DC was doing in the 00s and Marvel is doing now. Embracing the tropes of comic book superheroes without irony, camp, or deconstruction.

To give my players some background on the setting, I built a loose timeline for the campaign world that includes some of the important figures and events in super-history.

TIMELINE
Names marked with an asterisk (*) are public domain characters repurposed or this campaign and its history.

1930s
The Clock* (“The Clock has Struck!”) begins operations in New York City and becomes the first masked crime fighter of the Modern Age. The Woman in Red* starts operations in Los Angeles shortly thereafter. 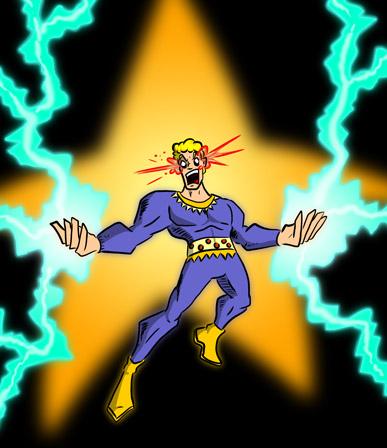 1940s
Stardust the Super Wizard* comes to Earth and begins his war against crime, dishing out horrific and violent justice to gangsters and fifth-columnists.

The Axis powers align themselves with the alien demon known as The Claw*.

Yankee begins operations on the European theater. Man of War* focuses on the Pacific.

The Daredevil* joins the Justice Union.

The Justice Union mostly focuses on homeland defense, but members each take turns in Europe, Africa, and the Pacific.

For reasons unknown, Stardust refuses to involve himself with the war, continuing to focus on gangsters, thugs, seditionists, and the occasional mad scientist.

Yankee and his arch-nemesis, Marschall Deutschland, die in an explosion. Neither body is found.

Nazi scientists place Hitler's brain into a chimpanzee and smuggle him out of Germany with the Berlin Circus. Monkey Hitler sets up operations in Antarctica.

The Justice Union travels to the moon to fight the Lunezons and close the Infinity Gate. Stardust does not return and is never seen again.


1950s
USApe is sent to Korea to fight the Communists.

The Superhero Protection Act is passed, protecting the rights of metahumans and costumed crimefighters.

Adversary activates the Reality Hammer in Colorado, threatening to unmake all Creation. Donovan and Adversary clash in a battle that spans the entire world. In the end, both are destroyed, utterly, as are the Ascension Rod and the Atrocity Gauntlet. Reality is saved.

The meta-security prison known as Tartarus is built in Adversary's former base in the Rocky Mountains.

1980s
Astronaut Jack Paladin lands on Mars and defeats the Nevermind. Paladin breaks the seal on the Oubliette of Eternity, freeing the Martian city of Katherei from time-lock. Jack Paladin becomes Champion of Mars and proclaims the planet off-limits to Earth and its nations.

Turbo Red becomes the first and only costumed hero to host Saturday Night Live. In the middle of a sketch where Turbo Red plays a fast-talking delivery-man, the villain Skullmonger attacks. In the ensuing battle, both Turbo Red and Joe Piscipo are killed on live television.

Discoman becomes the first superhero to die of AIDS.

Some children, born after the death of Donovan, hit puberty and manifest powers similar to the Ascension Rod (and, occasionally, the Atrocity Gauntlet). This is called, by some, the “Donovan Spark.”

Yarko quits the Power Corps in disgust and is replaced by the sorceress, Sabbath.

2000s
Millennium Bug attempts to hold Legacy City hostage. Is shocked and disappointed when his plans fail to manifest.

With the turn of the century, Masonic wizards are able to summon Man of War back to Earth.

Scarlet Specter begins operations in St. Jerome, at first as a crimefighter, but switches to monster hunting as incursions from the Monster World continue to grow in that city.

The Power Corps are destroyed.

Beowulf awakens from suspended animation to help repel the invasion.

The Vhaun are defeated thanks to a temporary coalition of heroes and villains.

The Journeymen begin operations in Chicago: