The Lands of Pangloss [Part One]

The game world for my upcoming D&D 5th Edition world is starting to come together. This is the fourth version of the map that I've done, because I’m obsessive like that.. I decided Pangloss needed more open, unexplored areas. The general idea is that the old, established cities are near the center, and things get weirder the farther out you go. Keep heading southwest, and you’ll wind up in Narcosa. Keep going northwest, and you’ll find a Red and Pleasant Land.

I wanted to make sure there was enough Moorcock/Lieber/Smith weirdness in the world, but I’m not trying to shatter any paradigms. The bullet points here describe the major cities and settlements. 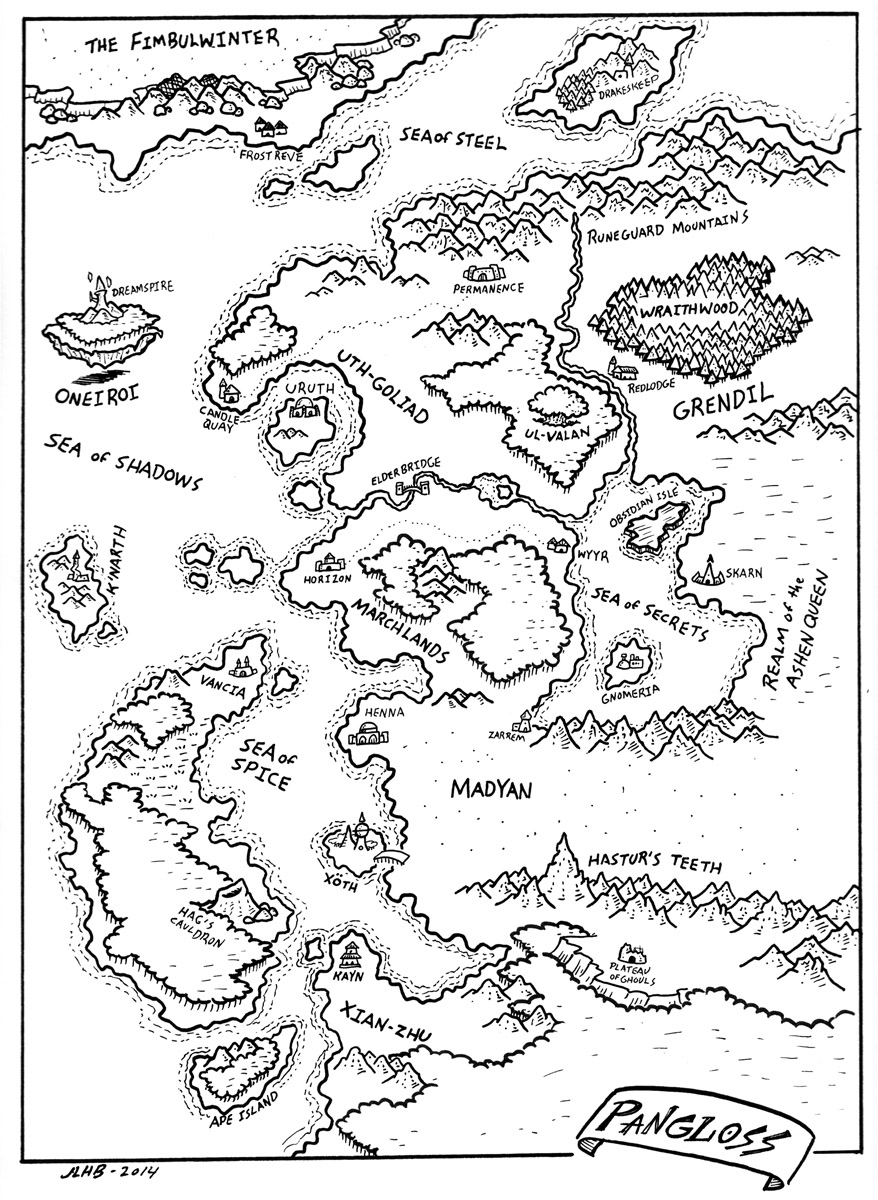 Divine King Castius Thule can trace his lineage 300 generations back to Brahma Himself. King Thule apprenticed under master dwarven smith in his youth, and is considered to be the greatest human smith alive.

Queen Golaria Bellona-qo-Thule is pregnant with their first child. She is a vocal supporter of The Purge, a radical faction of fiend/undead/witch-hunters.

As the official heads of the Uth-Goliad Church, the king and queen are both powerful clerics.

Uth-Goliad is a theocracy, and the Church of the Holy Couple of Brahma and Unastre is the official religion. Foreign faiths of non-chaotic/non-evil deities (especially Chalice and Hyperia) are tolerated, if not welcomed in the cities. Rural communities are more diverse in their faith.

Uth-Goliad enjoys a centuries-old alliance with the dwarves of Permanence. The nation greatly benefits from dwarvish engineering and construction techniques.

Slavery legal for prisoners of war, criminals, and debtors. 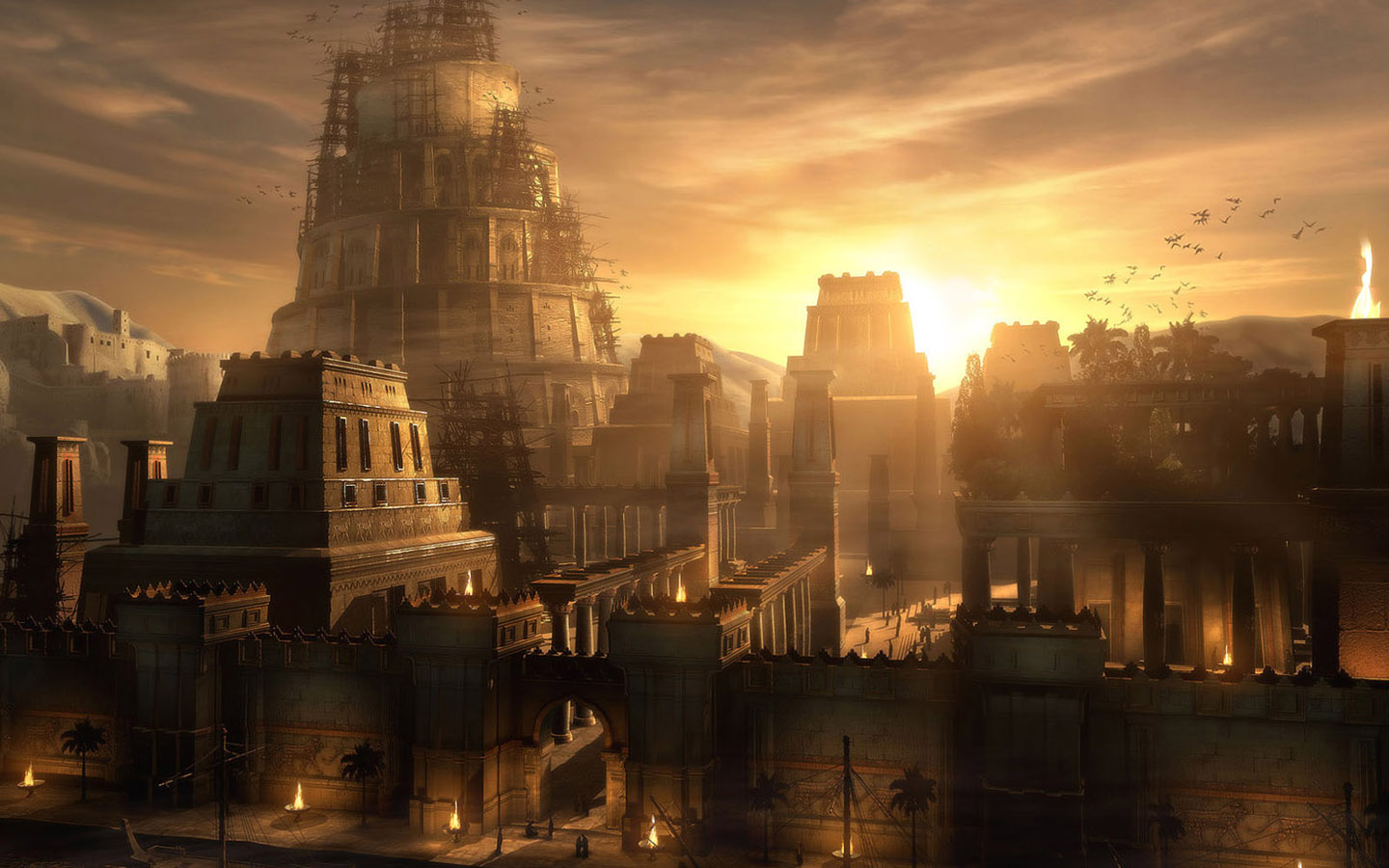 Madyan is not, technically, a theocracy, although the church of Zarthura has a strong influence on the nation’s politics.

New young king Elyas Jabari recently returned from adventures abroad to take the throne. Talented wizard and secular progressive, he has outraged much of the old establishment. Very popular with the common folk, who call him the Prince of Smiles.

King Elyas has opened the borders of Madyan to refugees from Gnomeria. Madyan is experiencing a mini-renaissance thanks to the influx of gnomish scholarship and science.

Slavery legal punishment for criminals and debtors, but have opportunities to work or buy their way to freedom.

Vast desert realm. Fertile lands along the west coast. Glowing Sands to the east. Razael Ridge to the north. Hastur’s Teeth mountain range to the south. Cassilda’s Peak is the highest mountain in Pangloss.

Barbarian tribes in the rocky lands near the mountains.

Loose collection of petty kingdoms and free cities. Uth-Goliad and Madyan have clashed numerous times over territory in the Marchlands.

Slavery made illegal by the Freeman’s Compact 10 years ago.

The Bastion is a faction dedicated to keeping the Marchlands free and at peace.

Thistlethorn Forest is a dark and tangled woodland infested by goblinoids. 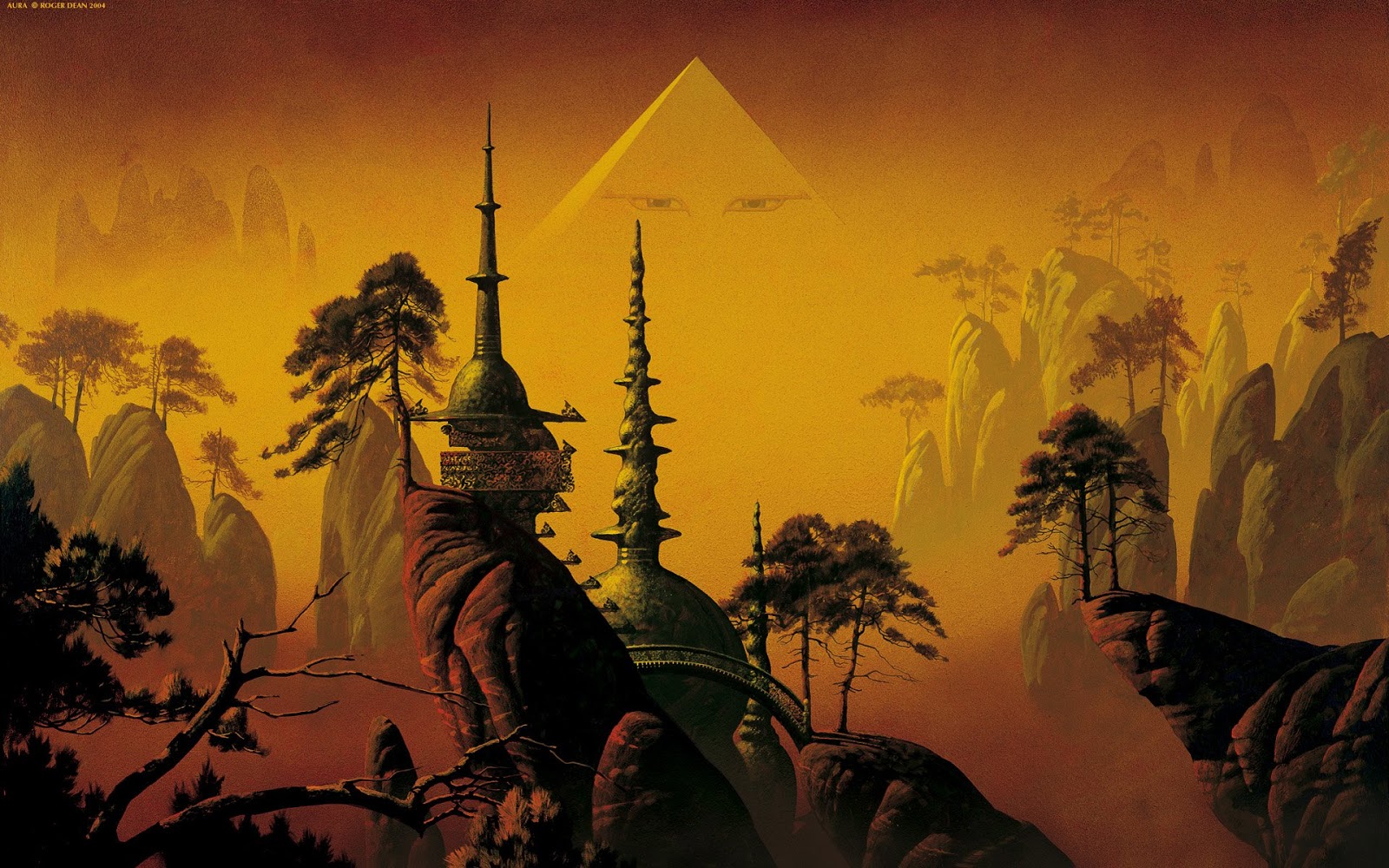 Xöth
Meta: The Outlands from WoW mixed with a bit of Count Brass.


Formerly human city taken to the Abyss 300 years ago. Returned 20 years ago.


The Adamant Citadel is built in the shell of an ancient demonic war machine.


The line between demon lords and gods is thin, and Unbreakng Kasterath will not allow his people to become slaves again. All clerics are outlawed in Xöth.


Xöth is a piece of the outer planes come to Pangloss. Red and purple turf and alien plants. Roger Dean geography. Weird metal towers and buildings.


Island connected to the main continent by a massive bridge of glass and gold and guarded by enthralled giants.

Vancia
Meta: I’m not going to lie. It’s Lankamar (with a touch of Vornheim).

Largest city in Pangloss, home to hundreds of thousands of people.
Thousands of years of building and rebuilding on top of itself, Vancia is a twisting, sprawling city with uncounted layers of subcity buried beneath it.

A decadent, dangerous, and unscrupulous city. The greatest city in the world.

Vancians are considered the shrewdest merchants and the greatest shipbuilders in Pangloss.

Hot and sticky weather with very rainy summers. Parts of the subcity prone to flooding.

Swamplands to the south are a rich resource of rare spices.

Plutocracy run by the Lords’ Senate. The rich buy Lordships, and must pay huge sums of money into Vancia’s coffers every three years to maintain their position on the Senate. Senate elects Patriarch/Matriarch who rules for life. Ruler can be removed with enough votes of “no confidence,” but such dissent is traditionally met with assassination.

Slavery is very much legal.

Rumors that the Cult of the Yellow King has infiltrated many noble families.

Monk School of the Way of the Shadow supposedly somewhere in the subcity.

Vancia is home to The Black Chapel, the largest temple to Death Itself in Pangloss.  A huge monolithic temple made of cyclopean basalt in a cavernous subterranean plaza.
Posted by Josh Burnett at 9:32 PM