The Lair of the Crimson Necromancer was pretty well received, and it got some people asking for more information about the Skull Witch. When I initially drew up the map, I didn't have any solid idea about who the Skull Witch was, I just thought the name was evocative. Of course, it's up to individual GMs to develop her as they see fit, but here's the Skull Witch as I envision her. Stats for Dungeon World! 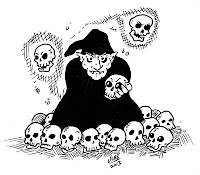 The Skull Witch (her true name is lost to history) was a foul sorceress in Times of Old. Upon her death she was rejected from Death's kingdom for being too unpleasant. She eventaully became mentor and lover to Radmanthus the Crimson Necromancer. When the necromancer was destroyed in his failed attampt at lichdom, the Skull Witch was heart-broken. Now she resides Radmanthus's former sanctum, lamenting her lost love and lashing out at interlopers.

The skull witch is always attended by her collection of flying skulls.

After the Skull Witch removes the skull of a victim, she binds into it a foul spirit from the Darkest Nether. The skull gains an evil cunning and vicious temperament  Flying skulls will swarm the Witch's enemies, biting, gnawing, and tearing at them with sharp, hungry teeth.

Instinct:  To protect the Skull Witch.
Posted by Josh Burnett at 4:23 PM