Hey kids, its the third week of Flumph Friday February, 2019 edition. This week I bring you the Flumph for Kevin Crawfor'd old-school game of epic mega-fantasy demigods, Godbound.

Flumphs
The Flumphs were once kind and benevolent healers from distant realms. Their temples and hospices dotted the small places of the Old Empire.

Then you humans had to go and fuck things up! Now the Flumphs are pissed, and they've teamed up with the angels. You've brought this upon yourselves!

These flumphs have had enough of your human bullshit and have teamed up to drive you out of their territory. Whose the goofy little jellyfish alien now, tough guy? A flumph swarm can commit Effort for the scene to create a cloud of noxious chemicals. Any non-flumph caught within the Mob must make a Hardiness save or suffer a -4 penalty to all their attacks and a +2 penalty to their AC until they leave the mob's area. The mob is made up of 1 hit die creatures, and is susceptible to powers and Fray dice that affect such foes. 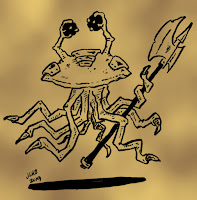 Sometimes a Flumph will rise above his peers. Its piety, prowess, and dedication to the forces of Order impress the angelic hosts enough that they bond the Flumph to a Word—usually Fate, Health, or Sky. A Flumph Champion is bound to a single Word and usually has access to three Gifts. Additionally, the Champion can commit Effort for the day to release a cloud of caustic chemicals with a 30' radius. Any non-flumph caught within the cloud takes 1d6 damage per round (rolled straight against unworthy foes). The cloud lasts until the end of the scene or until dispelled.