I knew my players were going to spend at least one session of out Lamentations of the Flame Princess game dealing with the fallout of their last adventure and taking care of some administrative activities like selling loot and restocking gear. As such, they’d spend a good chunk of the upcoming session in and around the closest settlement.

Vincent Baker’s seminal game Dogs in the Vineyard has great advice on how to create towns, and I’ve used those techniques for creating locations for years. Figure out who the important and interesting NPCs are. Figure out what they want. Create interesting conflicts between them. Make them come to the PCs with their problems. Figure out what would happen to everyone if the PCs did nothing.

That’s how I put together the little village of Hegendorf. Feel free to use it in your own games.
(My players should stop reading here.) 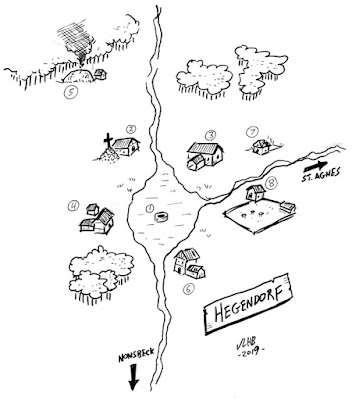 Hegendorf is a small village consisting of a few central buildings and about a dozen outlying farms. Most of the villagers are related in some way, with intermarriage between extended cousins. The detrimental effects of inbreeding haven’t quite manifested yet, but it’s just a couple of generations away. Hegendorf doesn’t have a proper inn or tavern. The trading post acts as a common meeting place. Visitors can usually find a farmer willing to let them sleep in their barn for a couple of silver pieces.

Hegendorf lies a day’s travel north of Nonsbeck. The Abbey of St Agnes, where the sisters brew surprisingly decent beer, is half a day’s travel to the east of the village.

Unless otherwise noted, all NPCs are 0-level humans.

1) The village well sits in the center of what passes for the town square. A bronze sculpture of a turtle is bolted to the rim of the well. Villagers rub it for good luck when they draw water. Its shell has been worn smooth over the years.

2) The village lacks a proper church, but it has a small shrine made of mortared fieldstone next to a humble meeting house. Friar Hubert, a Franciscan priest, oversees the shrine.  He is terse and cynical, and the past several years of war, famine, and death have severely tested his faith. He was in love with Brenda the herbalist, and her death at the hands of the witchfinders three years ago has weighed upon him. He mistrusts the nuns at the Abbey of St. Agnes.

3) Alexander Hegen runs the village trading post, buying and selling goods from the villagers as well as any travelers passing through town. Alexander is tall, ruddy, and built like a tree. His wife, Gertie, died of fever three years ago. He is childless, but dotes upon his 2-year-old niece. His sister Ilsa is married to the village blacksmith. Alexander is vocal in his disapproval of their marriage. Hegendorf doesn’t have a mayor, but Alexander is well-respected, and serves as the de facto headman of the village.

The trading post serves as a common meeting place for the men of Hegendorf. When the weather is pleasant, villagers drink and kibitz while sitting on barrels and benches on the large, roofed porch. They all crowd inside when it’s too cold out. The trading post sells all basic equipment and the standard rural prices. It does not usually carry weapons or armor, except for hatchets, wood axes, and knives. There is a 20% chance that Alexander has 1d3 shortbows in stock. If it does, there’s still only a 50% chance that there are 1d4 dozen arrows for sale. The trading post isn’t a tavern, but it does sell the beer that Alexander buys from the nuns of St. Agnes.

4) The blacksmith’s shop is an old but sturdy building with large wooden shutters that can be opened or closed as the weather permits. There is a small stables attached to it with 1d4-1 horse at any time. A stout cottage where the smith and his family lives rests behind the smithy.

The blacksmith is Antonio Palmetto a short Italian man with a wiry build, a large moustache, and broken teeth. He currently has no apprentice but is looking for one. Antonio is married to Ilsa, the shopkeeper’s sister. She is tall and auburn, like her brother. They have a daughter, Eleanor, who is 2 years old. Antonio is secretly sleeping with the charcoal burner, something his brother-in-law suspects.

5) The charcoal burner, Black Molly (level 2 Specialist, 4 dots in Bushcraft) is in her early 30s with short, black, frizzled hair. She is constantly covered in soot but has perfect teeth. Molly settled in Hegendorf about 5 years ago. She is an unmarried, outgoing, and independent woman with strong opinions. Therefore, she is largely mistrusted by most villagers. She is sleeping with the blacksmith. Molly always seems to have more money than a simple charcoal burner should. This is unrelated to her affair with Antonio, she’s just thrifty and lucky with money.

Molly lives in a small hut just outside of town near the woods, next to her large charcoal kiln. She has befriended a wolverine (named Wulfrick; HD: 3, AC: 14, 1d8 ravage, Morale: 11) that guards her home. The trees around her home are decorated with a variety of “granny magic” charms and talismans that don’t really have any arcane effect.

6) Stanfred Hagan, aka “Sergeant” aka Old Man Hagan is 70 years old and can still kick your ass (level 3 Fighter). He is either senile or insane, depending who you ask.  He always dresses in full uniform including breastplate, epaulets, and sword. He is tall and crane-like with a ratty gray moustache. Old Man Hagan assumes an any stranger or foreigner in town is a Swedish soldier come to kill him, and will act accordingly.

Old Man Hagan lives alone with his dog, Manfred, in the largest house in town. It’s a two-story house with an actual slate roof, but the whole thing is in poor repair. His living room features several antique German flags and a massive painting of the Emperor. He possesses many old swords and armor and has 2500sp in a hidden cache. His home is festooned with a variety of homemade anti-Swede booby traps.

No one has ever seen his dog Manfred, as the dog never leaves the house. “Manfred” is actually a 4HD demon (use the Summon spell) disguised as a small black schnauzer. Manfred whispers blasphemies and paranoid conspiracies into Hagan’s ears as he sleeps, and is the cause of the old man’s insanity.

7) The small abandoned cottage was the home of Brenda the herbalist. The roof has fallen in, the windows are broken out, and the herb garden is a tangled, over-grown mess. After Alexander’s wife died three years ago, the witchfiders came to town and hung Brenda as a witch. The house has been considered unlucky ever since. It could be purchased for 75% the normal price, but would require repair, and anyone who lived there would be considered unlucky by the villagers. A small iron box holding 150sp, a silver dagger (worth 10sp), and a medicinal draught (heals 2d4hp) is hidden behind loose brick in the remains of the fireplace.

8) Karl Hogon, is the local pig farmer and town drunk. He lives on his small, muddy farm with his horrible wife Bathsheba. Karl is always filthy and perpetually broke. He hates his wife and lusts after Black Molly.  It was Karl who ratted out Brenda the herbalist to the witchfinders. Karl has plans to break into Old Man Hagan’s home to find his treasure cache, but so far he hasn’t got the nerve. If a disreputable-looking group of visitors come to town, he’ll candidly tell them about his plans to rob the old man, offering to split the take 50/50.

If the people of Hegendorf continue their business without a group of Player Characters coming in and interfering with their lives, here’s what happens:

In a couple of weeks, Karl Hogon finally decides to rob Old Man Hagan. The pig farmer kills the old man in his sleep, and Manfred the dog reverts to its true, demonic form and tears Karl apart. With its favorite toy dead, the demon takes up residence in the woods and spends the next several weeks killing livestock, children, and travelers.

The village is in a panic, and the witchfinders are called in to find out who brought the demon to Hegendorf. Blame immediately falls upon Black Molly. Friar Hubert, feeling guilty for letting Brenda die three years ago, comes to Molly’s defense. Unfortunately, the friar gets into a scuffle with one of the witchfinders’ thugs and takes a sword to the neck. Molly is burnt at the stake, and the witchfinders leave, confident of a job well-done.

With his illicit lover murdered by the witchfinders, Antonio is swallowed by guilt, turns to drink, and becomes abusive to his wife and child. While drunk at the forge, he has an accident that burns down the smithy, the stables, and his house, killing Ilsa and Eleanor. This enrages Alexander, who strangles the blacksmith to death. With his life and village in shambles, Alexander leaves Hegendorf forever and become an adventurer.

Meanwhile, the demon continues to prey upon the outlying farms until the families turn against each other or flee the village in terror. Hegendorf lies in ruins.