Every Friday, throughout the month of February, I will stat up the world’s greatest monster for a different roleplaying adventure game system. 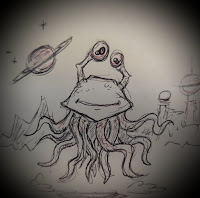 Space Flumphs
Space Flumphs are small but hardy, jellyfish-like aliens that float quietly on jets of air. They have leathery yellow skins, wispy sing-song voices, and friendly eyestalks. Flumphs are dedicated acolytes of the lost Star Gods and they preform sacred rites to these cosmic powers deep within monasteries hidden on lonely asteroids and swampy moons. Flumphs are peaceful and contemplative, but are quite glad to come to the aid of rebels and resistance fighters against the evil Galactic Overlords. If forced into combat, a Flumph can defend itself with hidden tentacle spikes or a potent chemical spray.

HD: 2
Special Abilites: Can fly as part of their movement; can squirt a stream of noxious chemicals, requiring the target to make an Agility test or suffer a Negative Die to all actions for the next 2d6 rounds; knows 1-3 spells, typically Disrupt Power, Language Comprehension, or Song of Serenity.