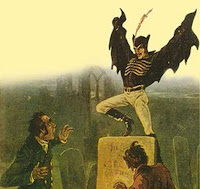 This weekend I pitched some games I want to run to my home group--Star Wars with Fate, Inverse World, or Dresden Files. I was kind of hoping to run Star Wars, but the group (after some debate) decided on Dresden Files. I was slightly disappointed for a moment, and then, in response to one player expressing uncertainties about a modern day setting, another player said "well we could always set it in another time period, like Victorian London?"

The Dresden Files in 1880's London? There's so much I can do with that!
Gog and Magog in the Nevernever!
Sorcerer mummies in the British Museum!
White Court hellfire clubs and underground brothels!
Spring-Heel Jack!
The Black Court at full power, then the sudden fall-out after Dracula's publication in 1890!
The Theosophic Society and the Golden Dawn!
Faeries faeries faeries!
H.G. Wells, Oscar Wilde, Arthur Conan Doyle, and Lewis Carroll all running around!
JACK THE GODDAM RIPPER!

So yeah. I'm pretty excited about this game's potential.

I keep dithering on on whether or not I want to try and convert and adapt the Dresden rules to Fate Core, or just go ahead and use the version of Fate as presented in The Dresden Files RPG. I'm probably going to just go with Dresden's rules. They're a little crunchier, but I've played the game for over a year with my Skype group, and I have a pretty good handle on it. It'll save me the trouble of conversion, too. I'll probably keep Fate Core's concepts of "succeeding with style" and "succeeding at cost." Those are pretty swell.

I've got a bit of research to do on the Victorian London. I'm scouring through my copies of Victorian Age Vampire and Cthulhu by Gaslight. I also found a book on Amazon called What Jane Austin Ate and What Charles Dickens Knew for one cent and $3.99 shipping, so that's on order.